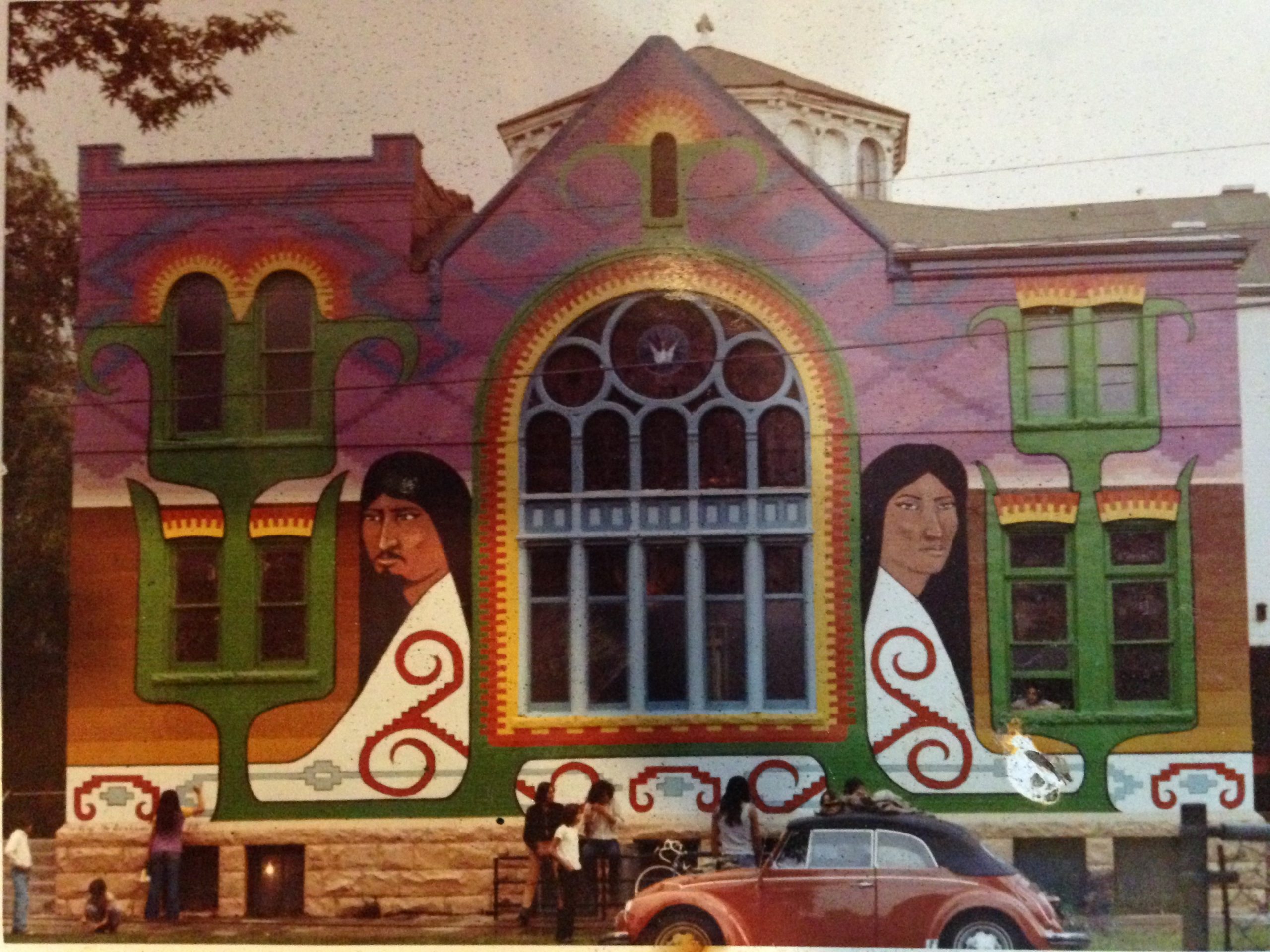 Public art has become a contested space visual battlefield in the epic story of Denver’s growth; the one to which the artist Emanuel Martínez has been a part since he painted his first mural on the walls of La Alma Lincoln Park in 1970. In a new art exhibition, Smoking mirrors: visual stories of identity, resistance and resilience, which opens on October 14 at the Museo de las Americas, Martínez will do what he does best: tell the story of the resistance and resilience of indigenous peoples, using mythology and history as a lexicon.

The exhibit opens just weeks after Denver City Council voted unanimously to make La Alma Lincoln Park a historic cultural district. Much of the conversation behind that decision centered on Martínez and the preservation of the hundreds of murals he created to celebrate Chicano history and culture, which many longtime residents consider to be the soul of a neighborhood threatened by gentrification.

“Her contributions aren’t just aesthetic,” said Denver City Councilor Jamie Torres, “they speak for the history of our community, our battles for visibility and justice, and our cultural contributions.” Torres District 3, which includes neighborhoods in the western part of town like Sun Valley and Westwood, is an open-air museum dedicated to Martínez’s murals.

Alma Lincoln Park has been a focal point for the community since its days as a hub of civil rights activism for the Chicano community of Denver. It was home to the Brown Berets, a Communist Party group, and the Crusade for Justice; the local organization led by activist Rodolfo “Corky” Gonzales protested against police brutality, discrimination in employment and inequity in public education suffered by Latinx communities in the city. It was also the site where Martínez painted his first of many murals, not under the auspices of municipal cultural management, but as a form of resistance.

“The first mural I did was outside the housing projects,” says Martínez. “When the director of the Denver Housing Authority heard about it, he came up with an eviction notice.” Martínez says it was his collaboration with the community to paint the artwork that kept him from being dislodged. “The residents who were helping me paint said, ‘If you kick him out, you’re going to have to kick us all out. “

This commitment to community is what continues to distinguish Martínez’s work – which has also appeared in the Smithsonian and in California – from contemporary muralists of some notoriety. (His first commissioned piece, completed in 1967, was for the Bishop of Los Angeles; a Catholic mass altar emblazoned with a crucifix bearing a brown-skinned Jesus and a native woman holding wheat and grapes, believed to signify bread and communion wine.) It’s a commitment that spans decades.

In 1971, Martínez wanted to create a space for young people to learn and express themselves through art. That year he was hired by Denver Parks and Recreation, first as a lifeguard at La Alma, then, after receiving a grant to implement an arts and crafts training program for neighborhood youth, in as a recreation coordinator. The only problem was the lack of space. Martínez and other members of the community therefore converted an old on-site storage building into a year-round center.

“I never really intended to be a recreation leader,” says Martínez. “I wanted to paint murals.

The unexpected concert, which Martínez remembers, paid around $ 3.60 an hour, had perfect timing. “The town was spending a lot more money removing graffiti than hiring me to do murals,” which Marintez said led him to become the city’s first and only full-time muralist. Denver. There was a catch, however. He had to buy his own paint and supplies. Despite the costs, the artist painted hundreds of murals on building facades and bridges, inside schools and other buildings.

He even turned public swimming pools into gallery space, like in Curtis-Mestizo Park’s “Eyes On the Park,” a fascinating multicultural mural of three subjects with tanned skin, square jaws and sunglasses painted in 1971. which represents the historically black and brown residents neighborhood. “La Alma”, painted in 1978, adorns a wall of the eponymous park’s recreation center with vibrant images full of symbolism linking contemporary Chicano peoples to their indigenous past. His 2000 mural titled “Confluent People” has become an iconic splash of paint along the Speer Boulevard hallway and one of Denverite favorites.

Martínez has since expanded his repertoire, working as a relief artist and sculptor; something that, according to Michael Chavez, program director for Denver Arts & Venues, is often overlooked. “His bust for Cesar Chavez Park is amazing,” he says. Its most recent, an imposing monolith titled “La Raza Unida”, was unveiled in June 2021 during a renaming ceremony for La Raza Park. The piece should be presented to the city as a gift to its permanent collection of public art, according to Chavez. And, at the Museo’s next exhibition, Martínez will unveil new works, including a 6-meter-long sculpture of Quetzalcóatl, the feathered serpent deity of Mexico, alongside more than 30 local artists.

Martínez’s cultural and political awareness began when he was a child, growing up at Five Points. He was part of a group of young people passionate about the Chicano movement. These early political voices were heard through art and continue to influence generations of Chicano and Latinx artists in Denver.

But some, like Lucha Martínez de Luna, archaeologist, founder and director of the Chicano / a Murals of Colorado project, and daughter of Martínez, see Five Points as a warning.

“I am worried because Five Points, which is also a historic cultural district, has almost 100% gentrified,” says Martínez de Luna. She suggests the designation could spur an influx of artists and their co-ops, leaving a trail for developers and yuppies to follow, displacing longtime residents in a process called “art washing.” “The cooperatives are starting to create artist studios, to discuss how they are going to work with the community, but they are also starting to work with developers,” explains Martínez de Luna. “That’s exactly what they did in Five Points, they even changed the name of the neighborhood to RiNo.”

Alma Lincoln Park is the second historic cultural district in Mile High City. Five points is the first. In a 2020 Westword essay by co-founder Patricia Calhoun, she pontificates on how the historically black neighborhood, once known as Harlem of the West, might be more aptly named “Gentrification Station”. The neighborhood in which blacks were demarcated stretched as far as the Platte River, and for many longtime former residents, its consolidation and renaming is a racial form or prejudice intended to erase its black past in order to make it an enjoyable arts hub.

The move came as the neighborhood, one of Denver’s oldest, continues to gentrify; this double-edged social phenomenon promises economic revival in the form of restaurants, cafes and art galleries, but also the displacement of long-time residents. This, just after a 2020 study by the National Community Reinvestment Coalition which named Denver the “second most gentrified city in America.” A 2015 study from the city of Denver had previously classified Lincoln Park and other historically black and Latin neighborhoods as “vulnerable” to gentrification.

This change potentially threatens Martínez’s murals. Since the designation only protects physical buildings, not what is painted on them, art exists at the option of building owners, especially works of art on private property. Thus, the organization of Martínez de Luna, whose mission is to promote, protect and preserve the heritage of the Chicano muralists of Colorado, is working against the clock.

She knows there is no way to get the art back once it’s gone. When asked how many murals had been made or still exist, she could not answer. “Every time I drive through a neighborhood, I remember a place where there was a mural and it’s just not there,” she says. “It’s heartbreaking.”